We’re still in time for a couple of highlights of the late spring/early summer growing season and two firm favourites with the ffO team.

Asparagus has always been a prized ingredient mostly because it’s in season for such a short time in the year.  Coveted by the Romans, the spears usually make an appearance in early May and for around eight weeks they are pared and trimmed, steamed and grilled and enjoyed by people all over the country (here we’re talking about the green variety rather than the white that is favoured on the continent).  This year, the prolonged wet weather earlier in the season meant that the asparagus has been a bit later in making a show but that does mean we’ve still got time to savour the taste!  (The heavy rain has had another, rather unfortunate, effect on the crop, kicking sand and grit up into the tips resulting in the need for lots of rinsing…sigh!)

Here in the ffO Kitchen we use asparagus in many different ways across our menus but at home we think British asparagus should be enjoyed simply; lightly steamed and then drizzled with melted butter and seasoned with salt and black pepper.  We might also char grill a few spears on the barbecue (if we get a break between showers!) and serve drizzled with olive oil and shavings of pecorino. 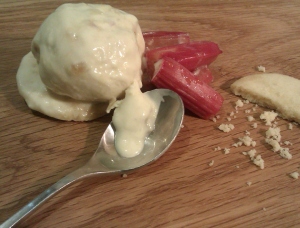 Another favourite of ours, (although a bit like Marmite for some!) and in season for a bit longer than asparagus (hurrah!) is rhubarb.  Some of you might have been enjoying forced rhubarb for some time already this year but field grown rhubarb is being harvested now and should be available for the next couple of months.  For some, forced rhubarb is superior with its tender stems and delicate flavour.  Field rhubarb generally has a more robust texture and taste and often needs more sugar to counter the acidity.  To be honest though, we really can’t get enough of either so the longer the season the better in our mind!

We always make a few batches of rhubarb and ginger ice-cream at this time of year, experimenting with quantities of sugar, ginger and ginger syrup to get the perfect result!  Remember; when making ice cream some of the flavour is ‘lost’ in the freezing so make sure you achieve a good strong taste before you turn it to ice!  We start with a custard base and add puréed rhubarb and small chunks of stem ginger and extra syrup to taste before churning in an ice cream maker.  Delicious!

Incidentally, experimenting with ice cream flavours is not a new trend.  According to food historian Jeri Quinzio, we’ve been trying different ingredient combination since the 17th and 18th centuries, including brown or rye bread, cheese, rose petals, foie gras and… asparagus!  (Jeri Quinzio in the essay ‘Asparagus Ice Cream, Anyone?’ from the Spring 2002 edition of Gastronomica: The Journal of Food and Culture, Vol.2 No.2)  http://www.jstor.org/stable/10.1525/gfc.2002.2.2.63

Among other ingredients in season and at their best at this time of year, look out for the following over the next few weeks: