The Romans believed it kept evil spirits away, medieval Europeans thought it aided digestion, Churchill prepared for war on it and Hillary climbed Everest with it but Paddington’s favourite is apparently fast disappearing from the British breakfast table. For those of us who make a batch at the beginning of every year and find, no matter how many jars they’ve made, they have to hide a few to make sure there will be some for the following Christmas, this is hard to believe! Our families can’t get enough of the bitter sweet orange preserve but it seems they are in the minority; or at least this is what has been demonstrated by consumer statistics. Marmalade sales are down and so it seems are the sales of other spreads. People, we are told, are increasingly more likely to grab a quick bowl of cereal or a breakfast bar these days than sit down to spread a slice of toast and if they do, marmalade would be their last choice of spread. It has been calculated that 85% of marmalade is sold to customers aged over 45 (William Langley, The Telegraph) but of course this doesn’t take into account those of us, of all ages, who make their own and watch as it’s greedily devoured by family and friends! This week is National Marmalade Week and according to their website, a record number of marmalade makers have entered jars into The World’s Original Marmalade Awards and Festival in Cumbria this year so perhaps marmalade isn’t toast quite yet! 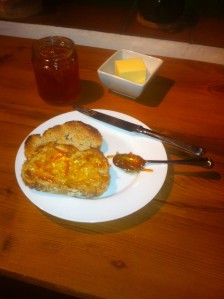 According to marmalade legend, the preserve was invented in the early 1700s when a Spanish ship carrying Seville oranges was damaged in a storm and forced to take shelter in Dundee harbour. The oranges were sold to a local merchant, James Keiller, whose wife Janet (or mother according to some versions of the story!), is reputed to have turned them into the marmalade. Whether this is strictly true, what is known is that the Keillers of Dundee established the first commercial marmalade factory and had a significant impact on the ‘spread’ of its popularity in Britain!

The origins of British marmalade can be found in the Portuguese ‘marmelada’, which was similar to ‘membrillo’, the quince paste found today in Spain. It first arrived in this country in the 15th century as an expensive luxury item bought by nobles who believed it to be an aphrodisiac and an aid to good digestion. By the 18th century, sugar and oranges were being more readily imported and the tradition of making marmalade in Britain was born. In fact the Spanish now have little use for Seville oranges and export most over here to us!

Seville oranges are available for only a limited time at the beginning of the year so making marmalade is a seasonal ritual. It is worth making for the gorgeous smell alone but there is nothing quite like seeing jars of your own produce lined up on a cupboard shelf. We tend to make two varieties each year; a classic, thick cut marmalade, a few jars of which we try (and sometimes fail) to leave to mature for a denser, richer flavour and a ‘black’ marmalade, much darker in colour with a slight caramel taste due to the addition of treacle or brown sugar.

Although the window for making marmalade has passed for this year, if you did make some or have been given a jar of homemade, why not try these interesting ideas:

Alternatively, thickly spread on hot buttered toast and enjoy for your breakfast!