We hope you’re managing to keep warm in this unseasonal weather!  With our new summer menus out we’ve been busy taking bookings for later in the year and trying hard to imagine guests sipping chilled drinks in the sun – not very easy at the moment!  We keep saying it but perhaps we will finally see the turning point this week…

In the meantime, take a look at our latest post about another quintessentially English pastime (besides talking about the weather!) that of taking afternoon tea.

“…there are few hours in life more agreeable than the hour dedicated to the ceremony known as afternoon tea.”

Henry James ‘The Portrait of a Lady’

Sitting here this afternoon, taking a quick break from the kitchen to leaf through a new food magazine, a cup of tea in hand and the feeling that we could just do with a little something to keep us going until dinner, we started to consider  how the tradition of ‘Afternoon Tea’, delicate little sandwich fingers, slivers of cake, scones etc. washed down with tea sipped from bone china cups, first began.

It’s generally believed that the custom was started in the 1840s by Miss Anna Maria Stanhope, the 7th Duchess of Bedford and a lady-in-waiting to Queen Victoria.  It’s said that she found, during the long wait between breakfast/lunch and dinner (not usually eaten until 8 or 9pm), she felt a ‘sinking feeling’ and craved a little something to stave off the hunger pangs until the evening.  She started asking her servants to bring her pots of tea and bread and butter at about 4pm in the afternoon.  This idea developed and she was soon inviting friends to join her for tea in the afternoon.   It wasn’t long before her friends reciprocated with invitations of their own and the ‘tea’ menu became more elaborate and varied.  ‘Afternoon Tea’ was a social occasion for the upper classes (tea was itself an expensive luxury at the time) but particularly for women who were denied access to men’s membership clubs after lunch but were able to receive guests at home.   By the Edwardian period, hotels were offering an ‘Afternoon Tea’ experience often accompanied by music or light entertainment and the custom remained popular until tea rationing was introduced during the Second World War.  Although it could be said that coffee took over as the fashionable hot drink in the later twentieth century, many of us today still enjoy the occasion of a proper ‘Afternoon Tea’.  Read more about the tradition of taking tea in the afternoon here.

Did you know tea is the ‘second most consumed beverage on Earth after water’?

What do you think constitutes the perfect ‘Afternoon Tea’?  Sandwiches of thinly sliced cucumber with a grinding of black pepper, scones with jam and clotted cream, Earl Grey tea, fingers of fruit cake, muffins, crumpets, all served on tired cake stands and bone china?  Click on the link for the recipe for a great, very easy, fruity tea loaf – perfect spread with butter and enjoyed with a cup of tea in the afternoon or at any other time of the day!

Take a look at our new Afternoon Tea Menu Summer 2013 or email info@foodforoccasions.co.uk if you would like to receive our full new Summer 2013 Menus. 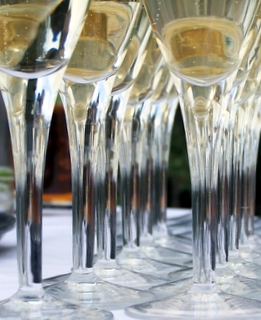